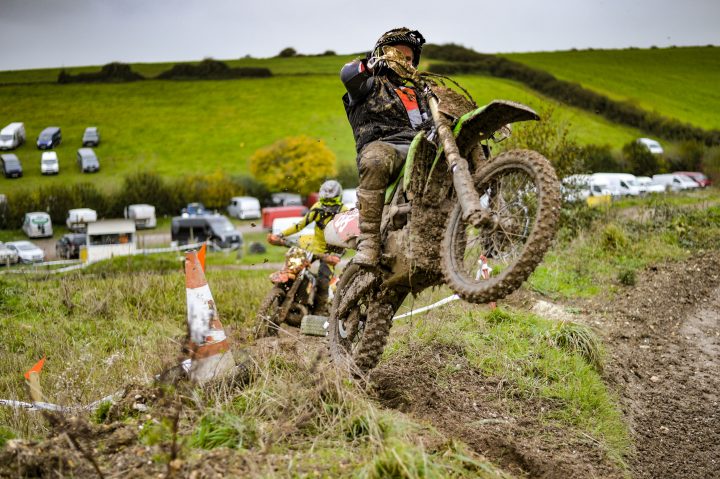 The second round of the winter series was vastly different from the first round with the weather making conditions challenging to say the least. The James Wright memorial race always seems to be a proper mud fest really bringing out the best in the competitors.

Rob Cross was leading for the first 2 hours until disaster struck paving the way for Dan Richards. Dan was the overall winner and earned himself a James Wright Military spec watch for his efforts. In close Second was Elliot Davies who is tied with Richards for the series standings. Third was Stan Watt who was the last rider to get the 11th lap, practicing what he preaches at rotor adventures. Ben Milward made a switch from MX choosing possibly the worst day but still setting some top 3 times before pulling out due to injury.

The winner of the expert class was the ever-consistent Gary McCoy who was the only rider of the group to get 11laps. In second was first round winner Dan Guy. Many thanks to Dan for stopping with an unconscious rider unlike the guy who collided with the rider! Third was Harry Neal who was challenging for the top spot throughout.

Dan Groom was the race winner in the expert vets and has secured himself a nice lead in the championship standings. Second was Tony Cotty, great result having not ridden for a while, hope you have recovered! Third was Jack Twentyman who gave his all keeping the younger vets on their toes throughout.

Lee Meredith took the clubman A top spot setting some blinding lap times despite the gooey conditions. Second was Jason Wright who has enough points to currently lead the championship. Third was Edward Eames who was the last of the group on 10laps.

Clubman B was won by John Foley and he also got the fastest lap time of the class. A close second was current series leader Jon Door. Third was Dan Clapp who held off close competition from 4th place Shaun Ash.

The clubman vets class was won by Shaun Philp who fought off competition from Luke Dewey both setting laps consistently within seconds of each other. Third place was Graham eke which was a great result despite not having much bike time recently. Shout out to Kev Park who finished the race abandoned his bike after the finish and struggled his way to the ambulance. Turns out he had a broken ankle! Speedy Recovery.

Stuart Williams won the sportsman class comfortably, setting some hugely quick lap times to be the only rider of the group on 9laps. John Broomfield was in second and the only one on 8 laps, riding most of the race alone. Third was Michael Donaldson who is also the winner of the second James Wright watch and the annual trophy for being the best placed sportsman under 30, nice one!

Ian Challoner won the sportsman Vets and had the fastest lap of the group by nearly 40 seconds. Chris Jordan was second and the last rider of the class on 8 laps, glad you found somewhere safe for your transponder… Antony Guppy was third having not raced for years, hope the podium made up for the aches and pains the day after.

Huge thanks to our amazing marshals who not only rode the track but helped people out of bushes, trees and deep sh*t. Keeping the race going and rescuing riders and bikes throughout, not even stopping for a burger with Grandad. Special Mention to Special Dave Sawtell who deliberately picked the muddiest spot to help out ending the day more covered than the riders but still smiling.

Speedy recovery to those who took a tumble in the challenging conditions.

Many thanks to the Wright Family, Dave and Sally for the prizes and your support. We will be donating to chosen charities, and with remembrance round the corner, thinking of you more than ever.

Covid has stopped play for now but we still intend on running the 3rd Round on the 13th December. We will keep you posted and will be spending the lockdown clearing up and digging new sections!

Many thanks to you all again for attending, stay safe and hopefully see you all soon!