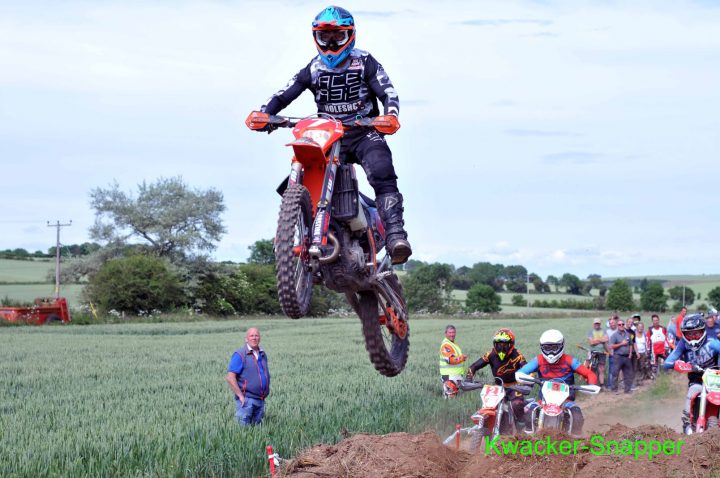 In the championship class Dom Thomas set a blinding first test but it did not take Tom Elwood long to warm up, eventually taking the overall lead by 8 seconds as well as the Monsters of Dirt fastest lap of the day. Tom was also the winner of the afternoon mini extreme, putting on a great show for the crowd. Arron Gordon was close behind in second, winning a few tests early on. Third place was Brad King who was not feeling 100% but dug deep to finish all 7 tests.

Ryan Mundell was the winner in the expert class, touching top 3 overall in some tests, he finished nearly a minute ahead of the next expert rider. Second place was Ashley Maller who set some very consistent test times to get 10seconds ahead of third place Ryann Comer.

Darren Kiff took the expert Vets win, pulling a strong lead from the very first test. Second was Mark Cornick who never manged to get his sub-6-minute target, so close mate! Third place was Danny Hall who had only 3 seconds on fourth place Steve Harding over the whole day!

Jordan King took a close victory in the clubman A class, only 5 seconds separated him and second place John Stanley. Jordan did have the fastest lap of the group and was the only one to break 6minutes. Third place was Eddie Davis.

The winner in the clubman B class was Paul Jones who had over 15 seconds of breathing space! Second place was Stu Williams, who was less successful in the extreme as another rider went for a lie down on his bike! Third place was Jack Allen, brilliant result for his first race in clubman B.

Henry Life took the top spot in the youth class, putting nearly 3 minutes on the rest of the class. Second place was Antonio Taylor who came in the top 40 overalls! Third was Finly Abbott, making the move from motocross.

Harvey Wilkinson was the sportsman class winner. Setting some impressive lap times, he won nearly every test. Second place was Tyler Rogers, with Stanley O’Brien in third getting quicker and quicker as the day went on.

In the sportsman vets, Russel Hicks took the win and honestly, he was the most excited and surprised person every time his number was called. Second was Alan Obrien, making it father son podiums for the day! In third place was Steve Taylor also grabbing a podium spot just like his son. Love to keep it in the family!

Now on to the top prize of the day, the Ben Saville Memorial Trophy. The recipient is always chosen by the Saville family and is awarded to riders that show true spirit and determination. Whether its recovering from a huge crash or riding in a full tuxedo, this trophy is true madness. This year it goes to Tony Walker and his old KDX for being contagiously funny and for showing that enduro is not about results, it is all about enjoyment!

A huge thank you to everyone who has supported this event, especially the antics in the extreme heats in the afternoon. Mito UK, VSMX, Louise King, Marylin Allis Art and Claire for the raffle prizes. Chris Boyce, Jack Sprack, Steff, Stumpy, Ivan and Chester for the help laying out the track. In total we raised £765 from the raffle and extreme, and we will add £300 to take this total over £1000 for the Dorset and Somerset Air ambulance.

Winter series dates will be out soon once we have confirmation of land accesses!Results can be found on the track times Uk website.