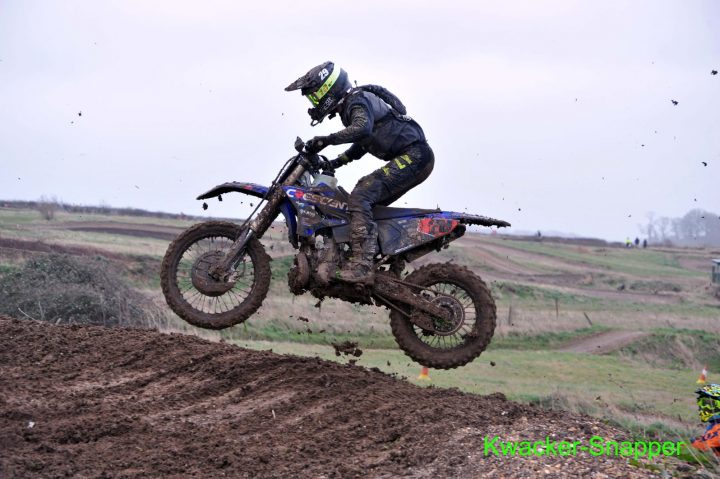 The final round of the RORE and Dorset Enduro Winter Warmer series defied storm Eunice thanks to our amazing helpers who came and put the track back up on Saturday. So, at 11am Sunday morning the championship class set off with Dan Richards getting a very impressive holeshot, leaving the rest of the pack to get tangled up. Eventually Ricky Wiggins recovered from a shaky start and put the hammer down, taking his YZ 250 to an overall win. Wiggins was the only competitor to get a 15th lap. In second place was Owen Richards who kept it clean and consistent all day. Third on the day was series winner Brad King, following some bad luck he nursed it home scoring enough points to win the championship, great season mate! Well done to John Stanley who already tied up the expert championship so went up a group for the first time and held his own.

In the expert class, young Henry Life got the holeshot and disappeared, finishing fourth overall and fastest expert as the only one in his class on 14 laps. Second place was Harry Neal who had a steady start but kept it smooth for a podium. Third place was Barney Thurgood, with Niles Reid in fourth. Tony Cook rounded out the top 5 and secured enough points to finish second in the expert championship.

Gary McCoy took the win in the expert vets, setting the fastest lap of the group and finishing eighth overall. Second place was Adrian Heard who was the last rider in the group on 13 laps. Michael El-Ayouby was third and clinched enough points from a consistent season to also get third in the championship.

In the clubman A class Rhys Trotter got the holeshot but couldn’t hold the lead for the full 3 hours and ended up in fourth. This however was the points he needed to secure the win in the clubman A championship. On the day Jake Lawrence took the win finishing well battling it out with many of the expert riders. The battle for second place was intense with Callum Picking-Reynolds just beating out third place Harry Billet. Harry finished one better at second in the championship though!

Finly Abbott took the win in the clubman B class, awesome result considering this is his first season of enduro, well deserved victory! Secon place was championship winner Harvey Wilkinson who had a consistent season taking a few class wins along the way. Third place was Matt Holland, Matt also finished second in the clubman B championship season.

The clubman vets class was won by Justin Cadman, and he got the fastest lap of the group by nearly a minute!  Cadman also accomplished a championship overall just beating out second place Simon Thomas. Si was riding a 40year old bike, in the over 40s, with number 40 and finished 40th overall! Third place was Andrew Scrivens who recovered from a steady start to round off the podium.

In similar fashion to the clubman vets, in the sportsman vets, Stu August won on the day and secured a championship win on his new Honda! Stu was also the only competitor in the class to finish on 10 laps. Second place on the day was Dave Mirraca, all his hard work has paid off with his first ever enduro podium, well done Dave! Third place was Warren Burbage who set one of the fastest laps of the group.

In the sportsman class Finlay Taylor got an awesome start eventually finishing fourth on the day and winning the sportsman championship at the same time. Carl Smith was top dog on the day, setting the fastest lap of the group by over 30 seconds. Second place was Rupert Adamson and he was the last rider of the group on 11 laps. Mark Duke finished the day in third.

Well done to all the finishers who braved the storm and to our awesome helpers. We were blown away by how amazing you all were over the weekend so massive thanks to Dave S, Stan W, Justin S, Brad, Shane, Craig, Pete, Paul W, Abbie, and Danielle.

The championship awards will be held on Wednesday the 23rd of March, there will be enduro practice from 12-5pm and then straight to the Royal Oak, Bere Regis in the evening for nibbles and awards. Everyone welcome, even those not collecting a prize.

Championship standings can be found on the Rogers hill raceway website.