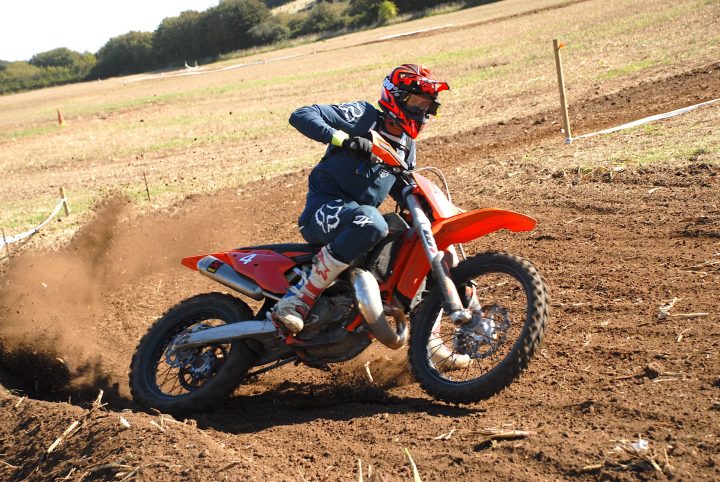 The first round of the Winter Series felt more like summer with perfect sunshine and track conditions, bar the chalk climb which took a few prisoners from all classes. It had hard written on it for a reason, the marshals enjoyed watching the carnage!

The small championship class was started with the experts for a bit entertainment! With in half a lap Elliot Davies was out front where he stayed for the remainder of the race, winning the overall with 15 laps. Seem to have gotten used to the 501 already! Second place and the only other rider on 15 laps was Daniel Richards. Speed must go with the name as Owen Richards finished up 3rd in the class.

Dan Guy won the experts after a mediocre start he passed much of his class within the first lap and stayed in the lead till the chequered flag. Epic result for someone who is so new to the sport! Second place was Gary McCoy who gave the group a minute’s head start. Having won every Expert Vet championship going we thought Gary could do with the challenge. Third place was Jordan Brigden, who has been steadily improving season on season, good to see him getting a well-deserved podium.

Martin Izzard was the winner of the expert Vets class, getting a solid 14 laps and coming 11th overall. Second was Dan Groom after a bad start he finished the day by setting the fastest lap of the group. Third place was taken by Chris Marsh who just got the extra lap.

Rhys Trotter won the Clubman A class, finally nursing the old bike to the finish! Time for the expert class now you have got a new one! Close behind in second was Marcus Clare who set some impressive laps times in the second half of the race. Third place was Adam Morgan who just missed out on the extra lap.

Robert Melita had a blinding race finishing comfortably ahead of the rest of his class. Christopher Standen and Ryan Hughes, Second and third consecutively, battled it out for the 3hrs finishing within seconds of each other.

The clubman vets’ class was won by Peter King who set impressively consistent lap times throughout the day. Second was Mark Davis, guessing that suspension is better FINALLY, great race mate. Third was Darren Carter who was the last in the class to get 13 laps.

Chris Dello had a spectacular race winning the Sportsman vets class by a country mile! Time spent coaching and training paid off! Guy Dix was second after a bad start having to pass third place Chris Jordan near the end.

Stuart Williams won the sportsman class and was the only rider on 13 laps and came a hugely respectable 50th overall. Second place was John Broomfield who battled it out with Jack Ellis (3rd) both finishing on 12 laps, great results guys!

Thank you to everyone for abiding to the new rules and big changes, we really appreciate your co-operation.
The new schedule is as follows at Rogershill Raceway (subject to venue changes if possible)

No events on the 25th October or 15th November

January 31st venue to be confirmed, but hoping for the return of Hethelton Forest

We are working closely with Dorset Enduro to ensure there is still a series, some of the later dates may be adjusted if new venues are found to replace ones currently available due to covid. Give us a shout if you know of any land that would be suitable.

Huge thanks to Dorset Enduro for all their help! Pete Coles, the legend that checks all your brakes work. The track marking teams who helped massively after Danny was out of action. Especially Steff, Brad King, Ivan and the rest of the lads!

Thanks to the event supporters, Talon, VSMX, Progrip whose awesome track tape was displayed in a few back wheels (keep to the track guys!) and Bravery!

Event photographers were, Alice at Photo finish 43 and Nicholas Guppy!