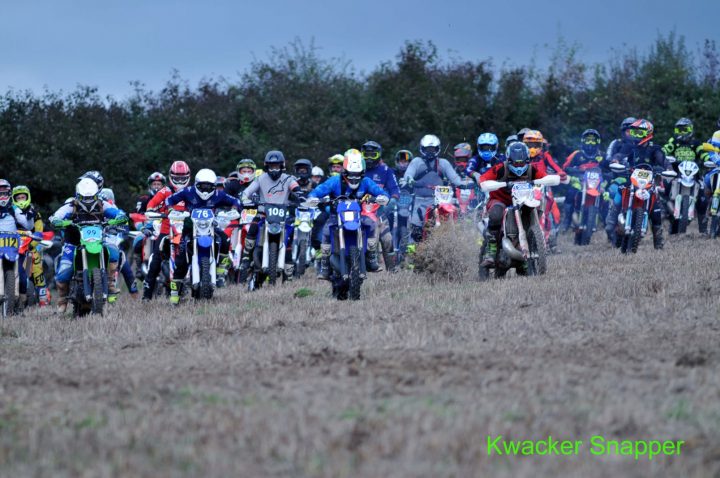 he battle between Ricky Wiggins and Brad King made for an exciting start to this year’s winter warmer series! Ricky was struggling to keep Brad at bay and in the end his bike started acting up and he was forced to retire. Brad kept it smooth, putting in the fastest lap over the rest of the finishers by over 45 seconds and was the only competitor to finish on 12laps. Second place was Owen Richards who was consistently on pace with every lap time within a minute of each other. Third place was Brett Rowland who got a cracking hole shot but the little 125 needed a few more pit stops!

Max Agar led the expert class for the first few laps until John Stanley got a pass in and led the group for the rest of the race. Tony Cook found a good rhythm after a bad start and finished second. Max slipped to 3rd but still got the fastest lap of the group.

Mark Cornick got the hole shot in the expert vet’s class but had to withdraw with brake issues. Stan Watt was the winner in the end setting the fastest lap of the group by nearly 30 seconds, despite recent injury. Second was Gary McCoy who was the last vet to sneak in on 11 laps. Dan Groom managed to fight back from a bad start keeping his lap times consistent to finish 3rd in the group.

In the clubman A class, Camlann Macdonald got off to a great start and had a great race ending up 10th overall. Jamie Muscat came in second with the young Freddie Davis in third all on 10 laps.

In the clubman B class, it was all going on with lots of swapping places throughout the group. Joe Beaumont took an early lead with some cracking lap times but dropped away leaving George Couper to take the eventual win from Charles Talbot in in second with Harvey Wilkinson getting third despite some crashes. Joe ended up 4th, with Chris Standen in 5th and the young Finly Abbot getting 6th in his first ever hare and hounds, amazing result!

In the clubman mature gentleman’s class, Justin Cadman took off like a scalded cat with Luke Dewey and Wayne Player close behind. Wayne kept the pace and managed to hold on for second. Si Thomas eased his way up to third, nice one grandad!

In the over 40s sportsman Glen “Drinky” Drinkwater was on it from the start, leaving James Couper to take second, Stu August and Dave Miracca  battled it out for the remaining place on the podium and Stu just pipped Dave in the end securing his first podium! Shout out to Jamie Gordon who finished his first hare and hounds, well done mate!

In the sportsman class there were a lot of new riders giving it a go for the first time, but it was Tommy Reid who was the man on the day with his best lap being nearly 1 and a half minutes quicker than the rest of the group. Finlay Taylor was in second, finishing as the fastest sportsman under 30 he has secured himself a nice watch in Memory of James Wright. Clinton Carter finished in third, also managing a very respectable 9 laps. Further back there were lots of battles going on and all bar 4 survived the 3 hours, well done to all of you!

The next round will be on the 21st of November at Rogershill again and the track will be changed as usual to keep it interesting. We had hoped to be at bovington but army exercises were shifted about and we couldn’t get access. However, it’s looking good for a trip back to the sand bowl next November for the 10th anniversary of the James Wright memorial!

Thank you to all who attended this event, we are so pleased another year of winter series has gotten off to a great start. Also, a massive thank you to all the amazing people who come and help! Pete Coles, who would also like to remind those with dodgy wheel bearings to get them fixed! Shane Babey and Craig Redmond for the timing. The track preppers, Dave, Brad, Steff, Stumpy, Jamie and Lauren. Louise King for stepping in and handing out transponders. Our awesome travelling marshals, Justin, Jason, William, Paul, Chris, Si, Paul C and the rest of the lads who kept things flowing.
Shout out to our amazing sponsors, Mito UK based in Poole (Progrip) and VSMX who supply the numbers and gives all proceeds to the air ambulance.

If you are looking for photos, please contact any of the following talented people, Nicholas Guppy, Andy Coombes or Dark Fairy Photography.